We are so lucky to visit England during Easter. Adorable lambs, happy daffodils, pale yellow primroses and the weather isn’t unbearably cold. Easter celebrates the resurrection of Jesus Christ after his persecution and crucifixion. This spring festival is celebrated on the Sunday after the first full moon after the northern spring equinox. It’s mostly likely that the name Easter derived from Eostre, a fertility Goddess, her symbol a rabbit. Early Christians accepted some of the Pagan traditions celebrated during Easter (exchanging eggs for example). Christian or Pagan, the sentiment is the same, Easter is a festival which celebrates new life and hope.

Good Friday, the Friday before Easter commemorates the crucifixion of Jesus Christ. The Romans regarded Jesus as a “political radical” after performing many miracles and gathering a large following, so they wanted him dead. It is believed that Jesus’ suffering and death was an atonement for the sins of humanity.

It’s traditional in England to eat toasted hot cross buns today, a tasty spiced sweet bun marked with a cross. The cross representing the crucifixion and the spices symbolising the spices used for Jesus’ embalmment after he died. My Sonshine tried his first hot cross bun and loved it!

We spent the day at a petting farm, with two of my sisters. Sonshine got to see goats, sheep, owls, llamas, ponies, geese, pigs…even an Easter rabbit!

“There’s an old saying: You can’t have Easter without Good Friday. Many people express the desire to have an open heart, a loving heart, a compassionate heart. Well, how do you open your heart? Usually, it’s broken open. Jesus on the cross breaks your heart. He breaks it open. You can’t look at the crucifixion without having an experience of compassion. Only a heart broken open — one that can have compassion for those who suffer — can truly appreciate the new life represented by Easter”

On Saturday we had great day visiting family on the south coast. I was so excited for my Sonshine to see the sea for the first time in his life (especially as we live in the geographical centre of India, we don’t get many opportunities). After a long day of crawling around a new house, seeing family he hadn’t seen since he was two months old and happily pushing the keys of his great-grandfather’s digital church organ, he was completely exhausted. He was so tired that by the time we made it to the beach, he waved goodbye to the waves, with a bewildered frown. I think he wanted to go back to the car to have a nice nap. So we left, and he did.

On Easter Sunday, I began the day feeling “home sick”, even though I still feel at home in England and I am enjoying these precious days with my family. I don’t think home sickness is the correct label for the feeling. Living between two countries is really hard, but you just have to make the most of every moment with the people you love, wherever you are!

The feeling was soon swept under a carpet of chocolate, until I just felt nauseous. Easter Sunday is a day to feel joy as it’s the day Jesus came back to life and spread love, hope and healing.

In the afternoon we went to the village to roll painted boiled eggs down a hill, an Easter tradition. Eggs are a symbol of new life, cracked eggs could represent the open tomb. We couldn’t find a very good hill for rolling, so it ended up being more of an egg lobbing. The eggs were all battered after a couple of rounds of egg lobbing, except for my nanny’s, she wanted to take it home and make an egg and cress sandwich.

We then visited the village church, and it was beautiful to see my Sonshine’s eyes light up when he saw the stained glass window. He was completely fascinated by the colours and the way the light shone through it. 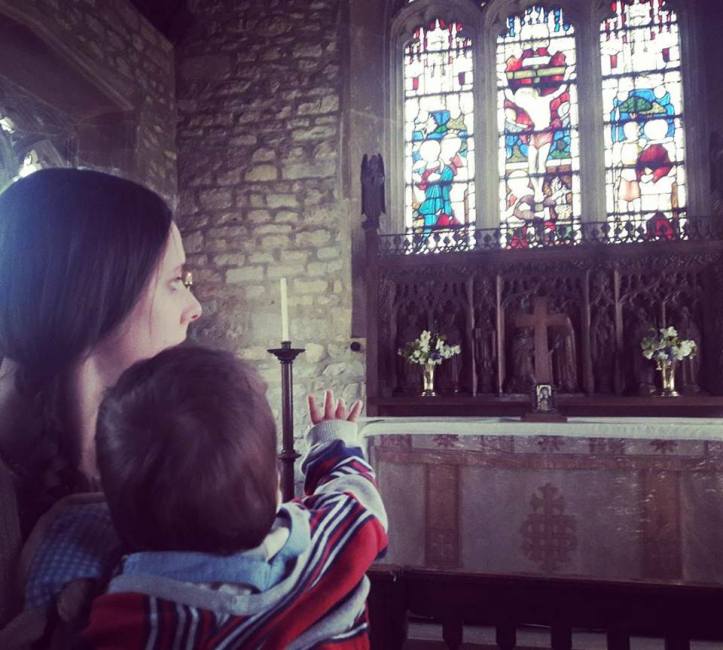 I find it interesting that Pagan and Christian symbology intertwine to become the festival we celebrate today, embracing spring, new life and rebirth. It’s something I find so life-affirming, recognising the similarities between cultures, spotting the collective consciousness at work, seeing a sparkle of something that unites us all. It definitely helps me stay enthusiastic about discovering and understanding the causes and history of the unique differences between the two cultures we live in. However different two cultures can seem, there is this unifying force that connects us all.

What do you think? Cancel reply

Yesterday we went blackberry picking with my grandparents. I'm very lucky to have a lovely footpath with hundreds of blackberry bushes on my doorstep. My 91 year old nanny hasn't been very well lately, and she walked the furthest she has in months! "Some of my happiest memories are picking blackberries, and I thought I would never do it again". ❤
Happy Independence Day, India! ❤ I'm missing seeing the school children's parade and all the flags! Post photos! #throwback
Sonshine's Sunflowers 🌻❤
😱Why did we leave India?😱 This is quite hard to write... It was 45oC+ and my little boy was at the door screaming, again, desperate to go out for a walk, but we couldn't. Often when it was cool enough to go out for a walk, kids would follow us, point at him, laugh, calling him "foreigner baby". Before becoming a mother, I didn't mind being a loner and considered the outsider (even if it was frustrating at times). I was able to observe, learn and write. I became a mother and becoming a mother in itself can be isolating and now I didn't want to be an outsider anymore. I didn't want my child to be the pointed at. I didn't want to keep having holidays in England while my husband had to stay in India due to his work. It was a really hard decision which involved our son (18 months at the time) and I having to return to England without my husband, for me to work long hours for 6 months before we could apply for my husband's visa and a further 3 months before he was able to join us in England. My husband quickly got a great job in the field he loves and was able to adapt to England much better than I could in India. I do miss India, family (including alfonso) and some special places. We aim to visit at least once a year and have our Indian family visit us as much as possible. The 4 years I lived in India made me stronger and wiser and I don't have any regrets. It's hard to live between two countries. It was a hard decision to move to England, but we must adapt to new situations... and here we are :). P.S. Alfonso the pug is being thoroughly pampered by my in-laws.
Sending flowery vibes of thanks to all my followers who continued to follow me during the last 2 years of very sparse communication❤ I really do appreciate those check in messages and words of encouragment I have received, thank you so much! ❤ I've had to take time not only to achieve some goals (we have started a new life in England), I've needed time to return to the mindset where words of kindness are more impactful than spiteful criticism, and teaching has helped me deal with that. As a teacher I have had to develop the ability be reflective while really holding onto wins and simultaneously treating every lesson as a fresh start. Learning from bumps in the road whilst letting them roll off my back, attempting not to take things personally. Phew! No need to wait for January 1st or a new moon for a fresh start ❤. A big thank you to you all and yay to another fresh start 😊
We moved into our first home a couple of weeks ago! 7am that morning, both sides of our family came for our griha pravesh (house warming) pooja, our family in Nagpur and the priest via video call. How amazing that an ancient ritual can be performed with the help of modern technology!! The transition from India to England has been long, busy, emotional and transformative, but everything is falling into place. Have a lovely weekend 🌷
%d bloggers like this: