My name is Alfonso and I have a story to tell. When I was a puppy, my mummy would carry me around everywhere and it made me feel important. She gave me lots of cuddles, walks and attention. I was her fluffy baby and no one could come between us.

I lived like a king, I could go into any room I wanted to. I was the most popular person you’ve ever met, everyone in our locality knows my name.

I got away with mischief and was always the center of attention when we had visitors.

Everyone would tell me how cute I am (pretty obvious, I know).

Then something weird happened, mummy started crying with happiness after she did a wee on a stick. I wee on sticks all the time… what’s was the big deal? I’ll never know. Humans are weird.

Slowly, she started putting on weight. It’s not very fair, I wish I was allowed to eat as much as she did. I didn’t mind though, she became much cosier to sleep on.

Then her weight gain got out of control, she got so fat, she had to leave. I’m guessing she couldn’t fit through the front door anymore, so she had to live somewhere else until she lost some weight.

I didn’t know what as going on.

I was well looked after and still got all my walks and treats, but I did miss the constant attention from my mummy. When she came back I was so excited! Moments later, my world crashed down when I realised she was carrying and cuddling a new baby… how could she do this to me?

She said she expected me to be constantly trying to play with the new baby because I am usually so fond of babies, but I couldn’t even look at him!

Several dark days followed, she tried to talk to me but I didn’t want to talk to her. 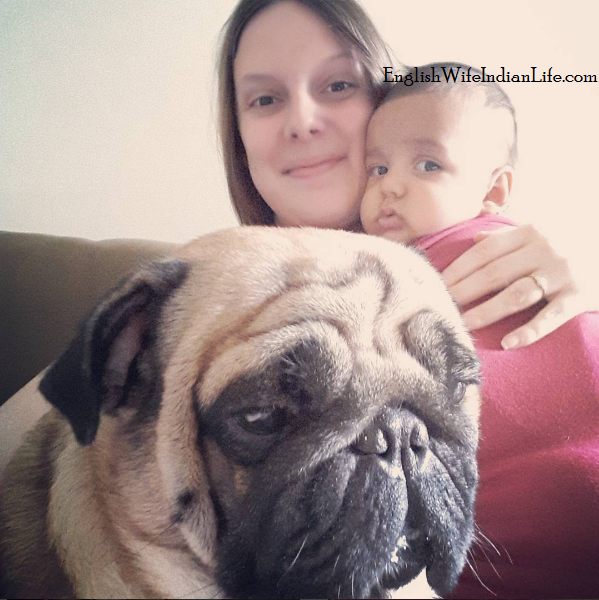 I wasn’t allowed in the bedroom anymore, and there were loads of new toys I wasn’t allowed to play with. Even my daddy didn’t have as much time for me. We would go out for walks together, but the new baby had to come too…

Who could overlook this beautiful face?

After a couple of weeks, the new baby wanting to talk to me.

He is a bit slow, can’t even walk yet (I could walk since I was two weeks old). I don’t know what his excuse is, just not as talented as me I guess. We can’t all be as fabulous as Alfonso. So I gave him a chance.

He’s not so bad I guess, the new baby has slowly grown on me. I’ve even started to feel a bit protective over him. I will have to admit, he is quite cute. Not wrinkly enough, in my humble opinion, but a member of the pack nonetheless.

The new baby likes me and that is starting to become the only thing that matters. He is always reaching out towards me, smiling and even barks when he can’t see me.

Someone thinks I am the cutest in the family again, finally! 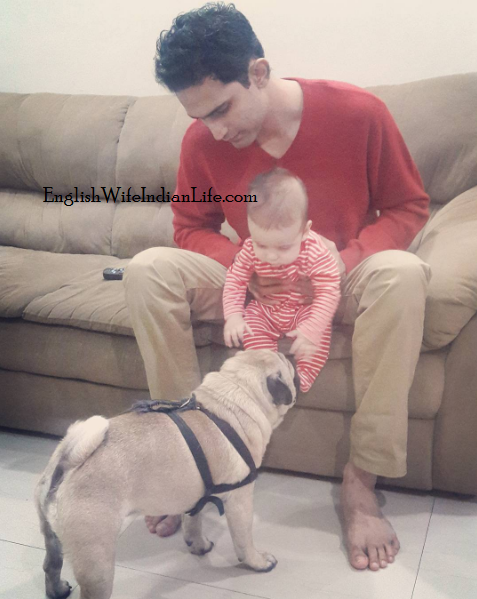 It took me a while to get used to the idea of being a big brother, and we are still not allowed to play with each other as much as we’d like (I didn’t want to have to bring it up again but, he still can’t walk).

I am now happy to share the role of cutest in the family and be baby’s first friend.
Baby’s First Friend: Episode 2

Yesterday we went blackberry picking with my grandparents. I'm very lucky to have a lovely footpath with hundreds of blackberry bushes on my doorstep. My 91 year old nanny hasn't been very well lately, and she walked the furthest she has in months! "Some of my happiest memories are picking blackberries, and I thought I would never do it again". ❤
Happy Independence Day, India! ❤ I'm missing seeing the school children's parade and all the flags! Post photos! #throwback
Sonshine's Sunflowers 🌻❤
😱Why did we leave India?😱 This is quite hard to write... It was 45oC+ and my little boy was at the door screaming, again, desperate to go out for a walk, but we couldn't. Often when it was cool enough to go out for a walk, kids would follow us, point at him, laugh, calling him "foreigner baby". Before becoming a mother, I didn't mind being a loner and considered the outsider (even if it was frustrating at times). I was able to observe, learn and write. I became a mother and becoming a mother in itself can be isolating and now I didn't want to be an outsider anymore. I didn't want my child to be the pointed at. I didn't want to keep having holidays in England while my husband had to stay in India due to his work. It was a really hard decision which involved our son (18 months at the time) and I having to return to England without my husband, for me to work long hours for 6 months before we could apply for my husband's visa and a further 3 months before he was able to join us in England. My husband quickly got a great job in the field he loves and was able to adapt to England much better than I could in India. I do miss India, family (including alfonso) and some special places. We aim to visit at least once a year and have our Indian family visit us as much as possible. The 4 years I lived in India made me stronger and wiser and I don't have any regrets. It's hard to live between two countries. It was a hard decision to move to England, but we must adapt to new situations... and here we are :). P.S. Alfonso the pug is being thoroughly pampered by my in-laws.
Sending flowery vibes of thanks to all my followers who continued to follow me during the last 2 years of very sparse communication❤ I really do appreciate those check in messages and words of encouragment I have received, thank you so much! ❤ I've had to take time not only to achieve some goals (we have started a new life in England), I've needed time to return to the mindset where words of kindness are more impactful than spiteful criticism, and teaching has helped me deal with that. As a teacher I have had to develop the ability be reflective while really holding onto wins and simultaneously treating every lesson as a fresh start. Learning from bumps in the road whilst letting them roll off my back, attempting not to take things personally. Phew! No need to wait for January 1st or a new moon for a fresh start ❤. A big thank you to you all and yay to another fresh start 😊
We moved into our first home a couple of weeks ago! 7am that morning, both sides of our family came for our griha pravesh (house warming) pooja, our family in Nagpur and the priest via video call. How amazing that an ancient ritual can be performed with the help of modern technology!! The transition from India to England has been long, busy, emotional and transformative, but everything is falling into place. Have a lovely weekend 🌷
%d bloggers like this: